The Whitworth is a prominent, long established gallery located in Whitworth Park, Manchester.   I approached them as I wanted to work with curators and specific collections there to develop my practice and forge new links to research certain themes. I initially researched the collections online and then sent a specific email to the fine art curator stating that I would like to study the Blake collection as a point of inspiration and contemplation to create a body of work exploring specific themes of time, symbolism and mysticism, to push my work forward and explore a context for it.  There was a prompt and courteous reply from one of the curators and the connection was set up. This has led to working over May, June and July with several different collections and conversations with two curators exploring and developing the above themes.  During this time I have been developing, discussing, drawing and researching specific ideas centred around mysticism, time and symbolism and tracing and identifying  the threads that are emerging in my own work. However there has been a lengthy gestation process in my own artwork as research, development, connections and collections has taken up much of my time and focus here, with some unexpected areas of creative  process and progress.

William Blake is a well known great British visionary poet and artist. I requested to work with the Blake collection held at the Whitworth,which was accepted and began in May. There is to be a Blake exhibition later on in the year from September to February at the Tate, London. I had the great privilege of working with a selection of drawings and the Ancient of Days before it was shipped off to the Tate. The drawings themselves were moderate in size and the Ancient of Days was a surprisingly small relief etching with gouache, gold and watercolour measuring 23.4 cm by 16.8 cm, yet with great impact. As a child we had had a large copy on our living room wall and I currently have a copy of it in my studio inherited from my mum. It was a work with power and personal significance over time.

I found that there is a great difference between appreciating a copy of the image and working with the original. There is no substitute for being in the presence of the artist’s creation and being able to see their hand in the work. The curator gave me some relevant and insightful reading. According to Peter Ackroyd in his book BLAKE(1995) this was one of the most powerful visions Blake had and was ‘ one of the last images upon which Blake worked, in the hours before his death’ (Ackrpyd P, p357) interestingly he  describes  it as perhaps being an ‘idealised self-portrait’ (Ackroyd P, p358), a fusion of who we are in our dualistic earthly state with who we want to be or rather our finer qualities; our fallible imperfectness fused with the godlike. It holds the possibility of metamorphosis, of a mystical evolution for the human state. ‘He remained half in love with it all his life’ (Ackroyd P, p358).

I actually spent a considerable amount  of time looking, seeing, contemplating, questioning, discussing, photographing and sketching. The composition with the radials from the cloud and the compass to measure and navigate with I found powerful and symbolic. They would later influence my own work on Interconnectedness.

Blake also created two sets of illustrations to Milton’s Nativity Ode. One of these is part of the Collection which I was able to study.  There was also one drawing in particular  which stood out from the collection; Blake’s early poem Tiriel in which like King Lear “a tyrant curses his children before going into internal exile. Blake converts the bleakness of the poem into a raw, elemental and primitive composition.” The curled, withdrawn and foetal figure drew my attention as a signifier for the theme of time and how at times we return to this state during our human experience. Working with Blake’s originals and reading the recommended texts I was given was a powerful and insightful experience. This was feeding into gestating ideas about time, mysticism , interconnectedness, symbolism and perception that I would later develop.

The works of Redon, Rossetti and Burne-Jones were then recommended to me through written dialogue with the curator to follow the thread of mysticism and symbolism. 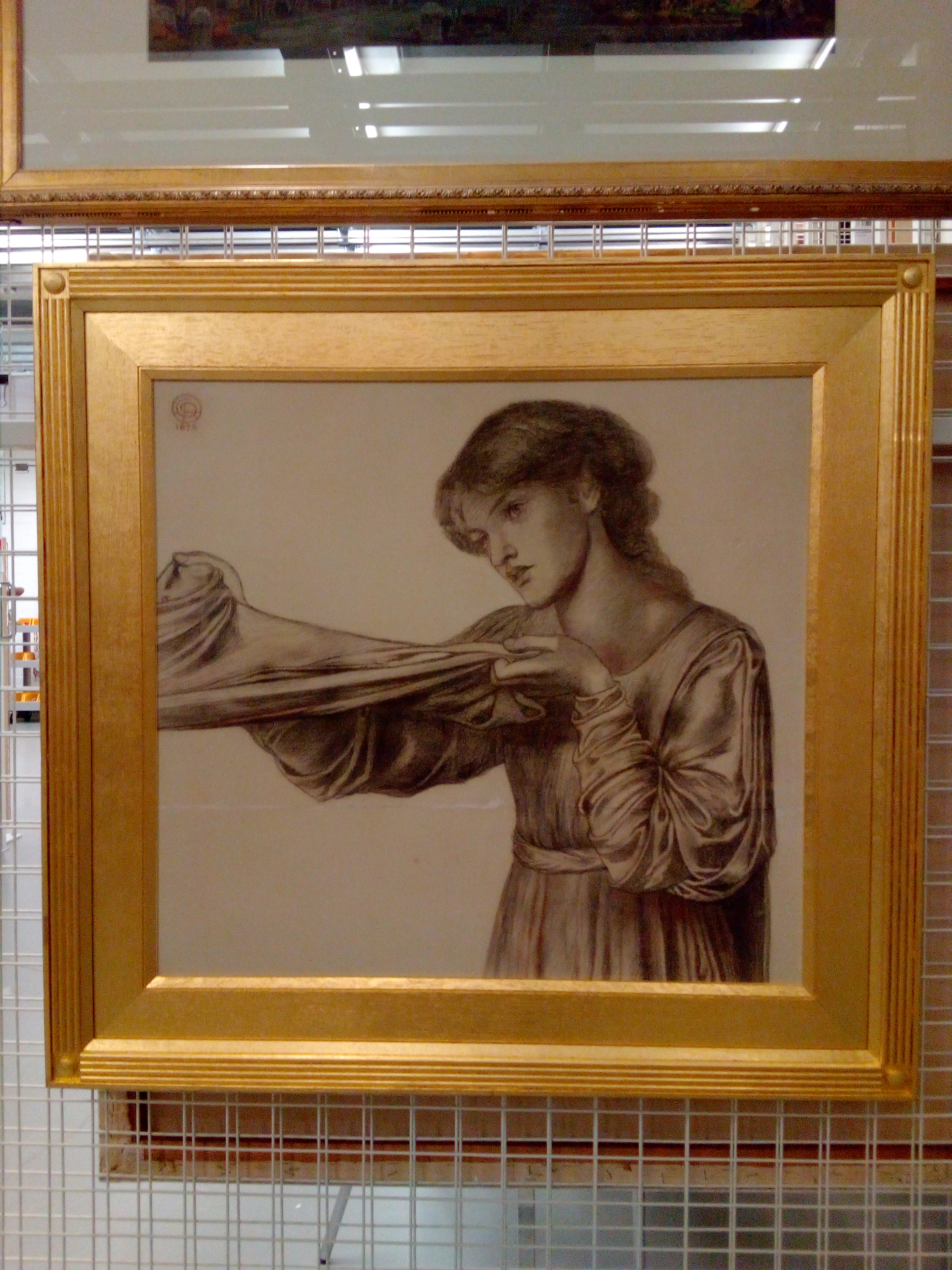 Odilon Redon came to colour later in life after fifty and before this worked mostly in monochrome describing black as :“the most essential of all colours. Above all…it draws its excitement and vitality from deep and secret sources…One must admire black.”

In some ways I felt I was doing the opposite of this and coming to monochrome later in life through work I will show in the next post.

The study for the female figure in The Lament, I chose for it’s connection to the theme of time and the passing of all things including youth and it’s asthetic value.

According to the Whitworth , Burne-Jones wrote in a letter “I mean by a picture a beautiful romantic dream of something that never was, never will be – in a light better than any light that ever shone – in a land no one can define or remember, only desire – and the forms divinely beautiful“. Mystical in an almost unimaginable sense. The face fascinated me as a connection to the self or possibly a disconnection as the face was turned away to the left.

The repeated heads in Redon’s work with the contrast of colour and form possess a mystical quality and  a transcendental connection to some otherness that I felt mystical art was trying to bridge.

It was from this work and being shown the archives including Rossetti’s work stored there ; also from discussing the question with the curator “Does mysticism still have a place in contemporary art?” that I was asked a key question that seemed to consolidate my unknown intent.

“Are you seeking to contemporise mysticism?”

This was a key insightful moment for me, a clarifying question that illuminated my purpose.

According to the Lexico online dictionary

1Belief that union with or absorption into the Deity or the absolute, or the spiritual apprehension of knowledge inaccessible to the intellect, may be attained through contemplation and self-surrender.

2Vague or ill-defined religious or spiritual belief, especially as associated with a belief in the occult.

This realisation followed discussion of my work and the collections at the Whitworth . In the artistic sense I felt like I was developing a new definition of mysticism. If we take the occult to mean that which is hidden and sprituality to be connected to the original latin root word of inspirare (breath) -inspiration. Then this is a term that could be developed and defined in terms of my own practice and current creative context.

The next session, following recommendations, was one with a collection of Outsiders work and with two curators who pointed me in the direction of articles, books and talks to further develop this theme and to deeper understand the context.

The Whitworth holds a collection of Outsider Art with around 1200 works of art by more than 120 artists collected by curator Monika Kinley and gallerist and curator Victor Musgrave over a period of 30 years (1979-2010). This is the Musgrave Kinley collection. Outsider art is a term with several meanings: self-taught, visionary, those with mental health problems and those outside the mainstream artworld. In the past I had exhibited with a group of these Raw Artists in London.

The curator recommended the works of Adolf Wolfli, Madge Gill and John Bunion Murray as being particularly fine examples of visionary artists from the collection.

John Bunion Murray used colour symbolically. He was a self-taught artist from Georgia. Murray was a tenant farmer for most of his life. Born in 1908: He had eleven children and his wife left him in his fifties. In his sixties he had a profound religious experience and began to express himself through creating protective and spiritual art. The three primary colours bore significant symbolic meaning. Red was an evil force or torment, Blue was positivity or the force of good and yellow was God or divine presence. White was spiritual purity and black a transitional state. The symbolism of black linked to the description by Redon of his use of it and prompted me to consider whether colour has any inherent meaning or is imbued with meaning over time and context. The context was important and as I discussed with the curator art is experienced or read differently depending on the context or exhibtion.

Madge Gill (1882-1961) was a British spiritualist artist, whose work entered the Whitworth’s collection as part of the Musgrave Kinley Outsider Art Collection in 2010.

Gill considered she worked in collaboration with the spirit world;  in particular with  her guide called Myrinterest.  Her work included knitting, weaving, crochet, drawing, writing and playing the piano. According to the curator she used a variety of materials and sizes and would work on roles of calico up to 100 feet long unrolling a bit at a time so the work in its entirety was not revealed until completion. There was a female figure that was repeated in her work that could be a reference to children that she lost. The idea of a work evolving without specific idea of where it would end is one that fed into my own work I was beginning to create. Also the repetition of symbols and images giving them a kind of rhythm and prominance in time.

Through this research and development work at the Whitworth. Through the John Bunion Murray symbolism of colour; the evolving spiritual process of Madge Gill; the mystical portraits and profiles of Redon, Burne Jones and Rosetti. Through Redon’s transition from monochrome to colour; time, symbolism and the mystical experiences and processes of Blake. Through the conversations about the importance of context and the contemporising of the mystical; my own work, which had been gestating in the form of developing ideas and influences, began to emerge.